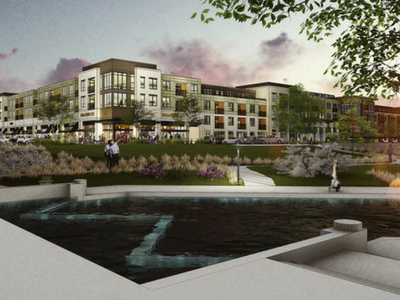 MISHAWAKA — Two large, grassy blocks on the edge of Beutter Park are shutting down to the public. Within the coming weeks, Spring Street will vanish heading north from the roundabout with the farm windmill at Front Street. So will a parking lot at the park’s western edge.

A fence, halfway erected now, will surround the whole site in the next week. It became private property two weeks ago as Indianapolis developer Flaherty & Collins took ownership, said Mayor Dave Wood, who noted Thursday that, “We’re done mowing these fields, and, for the first time in 25 years, this site is productive.”

Contractors are starting the 20-month project of building The Mill at Ironworks Plaza with 232 apartments, a public and private parking garage and space for restaurants and retail.

At Thursday’s groundbreaking, restaurant chain owner Gary Brackett said he signed on as the first tenant because the site “screamed Stacked Pickle,” thanks to the amount of foot traffic already at Beutter Park and the Riverwalk, along with the closeness to other downtown businesses and Mishawaka High School. Stacked Pickle, he said, draws families and draws from a three- to five-mile radius. 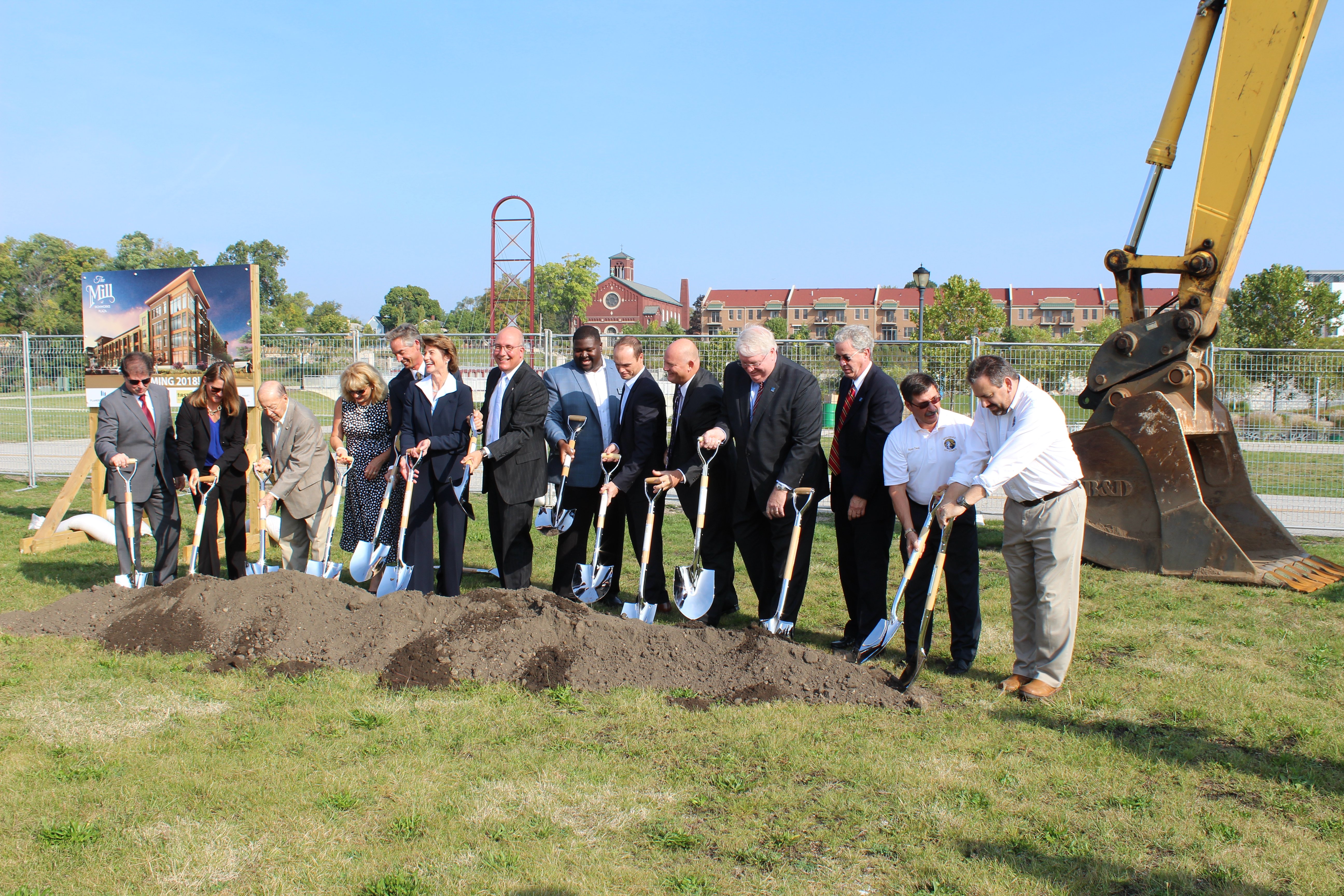 Brian Prince, vice president of development and lead project developer for Flaherty & Collins, said the restaurant will serve as a retail anchor, taking up 4,800 square feet out of a total 13,000 square feet. Prince said it’s early enough so that he can be choosy about which retailers to sign, wanting them to fit with the “active” and “vibrant” environment that’s being built. He said he’s already turned away a salon that needed too much space.

The Mill at Ironworks Plaza will offer amenities like a courtyard, an activity lawn, a bark park and an indoor bike parking and maintenance room. It will be a single building filling the two blocks, between Hill Street and the Ironworks Building.

The city is still considering exactly what it will put into the next phase of improvements at Beutter Park, while the new building is being built. Wood said the city would likely pursue a portion of the $7 million in options that it has scoped out, from a new plaza to a ribbon-shaped ice skating rink. Last week, he said, the Beutter Park improvements were approved for $114,000 from the state’s Regional Cities Initiative. The goal, Wood said, is to draw people to the “urban core.” 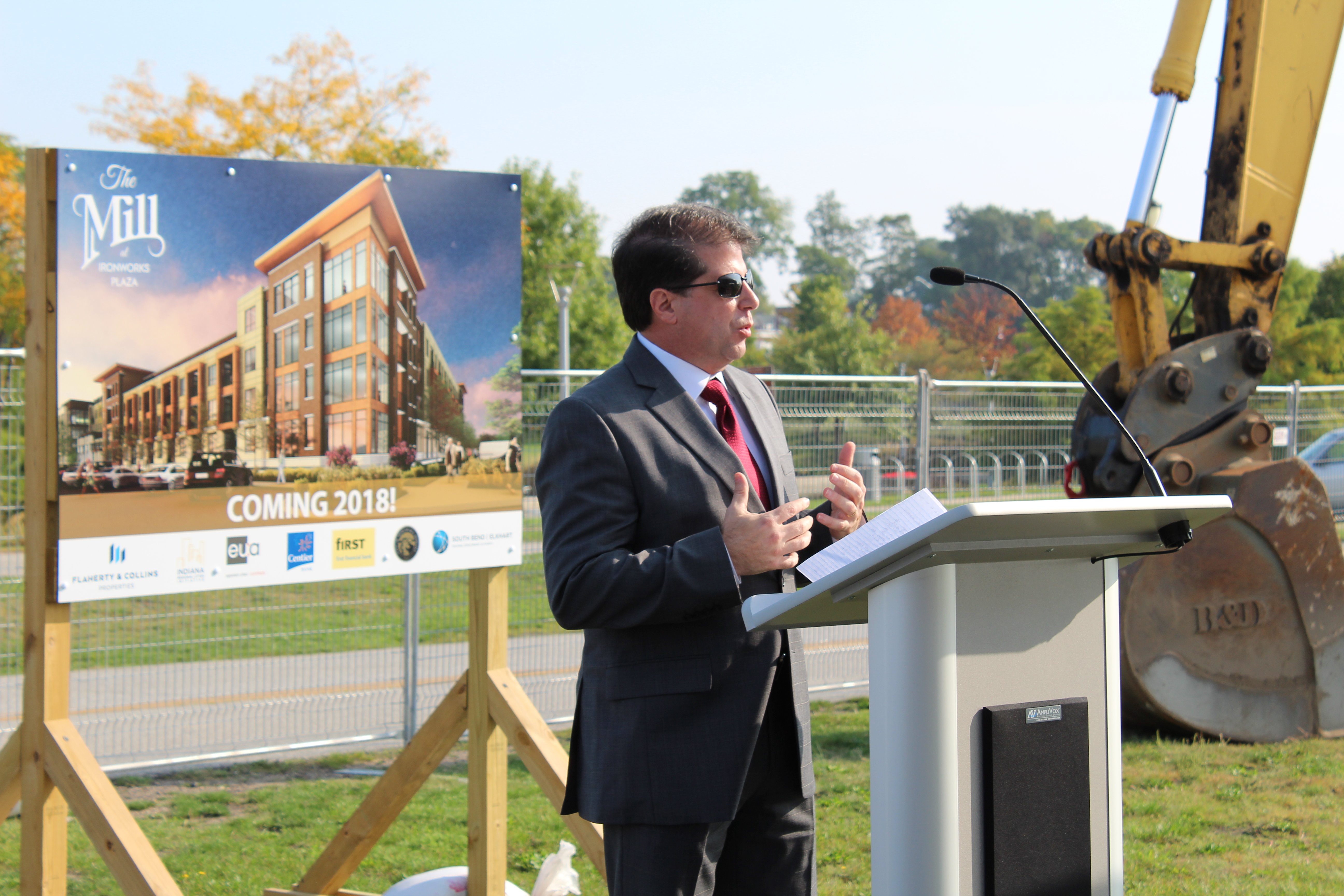 The Regional Cities Initiative is also contributing $5.26 million to Mill at Ironworks Plaza, along with more than $9.5 million from the city. In all, it will cost $45 million.

The project will involve roughly 200 to 250 construction workers over the next 20 months, said Jason Schoettle, vice president of construction for Flaherty & Collins. They’ll strip the earth in the next couple of weeks, then spend a month installing concrete footings in the ground, he said. Through 2018, they’ll erect the structure itself, then finish the interior in 2019, completing it by summer 2019. Flaherty & Collins will serve as general contractor with a handful of staff, including a locally hired project supervisor. The company is still waiting for bids to come back from subcontractors, Schoettle said, answering that the company aims to hire contractors within the region.

On Thursday, you could see and hear cranes and concrete trucks working at the western end of Beutter Park, where a separate developer is adding four buildings to the Townes at Kamm Island, for an extra nine condominiums. That owner, Concept Creations Development, has reported that its project would complete the town homes that it began building in 2007.

Beutter Park will remain open. But, for the next year and a half, construction of The Mill at Ironworks Plaza will cause the city to seek “creative” solutions to the loss of parking — partly in the paved lot at the park’s western end, but also in the grassy lots where cars were allowed for special events like the Independence Day fireworks, said parks Superintendent Phil Blasko. When finished, the new parking garage will offer 133 free spaces for the public.