The South Bend - Elkhart Regional Partnership is a collaboration of the economic development partners from 47 smart connected communities in northern Indiana and southwest Michigan. The South Bend - Elkhart Regional Partnership focuses on a long-term systemic approach to advance the region’s economy by aligning the efforts of various stakeholders around five key areas: educating a world-class workforce, recruiting and retaining great talent, attracting and growing new economy companies in complement to our remarkably strong manufacturing industries, promoting inclusion and sparking opportunities for minorities and helping entrepreneurs thrive. The South Bend – Elkhart Regional Partnership seeks to unify and collaborate so that together, the communities across the region to work together to achieve what cannot be done individually.

To grow the South Bend - Elkhart Region’s economy by improving wages and livability, we will move forward together as one region to attract and grow the best industries and workers. The region must unify to fight the enemy of declining wages and population stagnation. Together we will capitalize on the significant manufacturing and educational resources already available.

Diversity of Thought Creates Inclusive, Powerful Action. We celebrate individuality to fuel collaborative regional economic growth. We work with diverse committees comprised of stakeholders from different racial and ethnic groups, gender identities, industries, cities, and socioeconomic backgrounds. We believe diversity drives economic prosperity. We foster inclusivity in our own efforts as well as within the entities we do business with. We encourage both a top-down and grassroots approach. This gives us the freedom to holistically address our region’s strategies and initiatives.

The RDA and the LEDOs developed the following governance structure to support the South Bend - Elkhart Regional Partnership in its execution of the Regional Economic Development Strategy (REDS) Plan. This structure enables the key stakeholders to effectively align their economic development efforts. Representatives from of the LEDOs, Local Government, southwest Michigan, Private Industry and other key stakeholders, along with the committee chairs representing our five strategic drivers will govern the South Bend-Elkhart Regional Partnership as it works to execute the strategies in the REDS Plan. 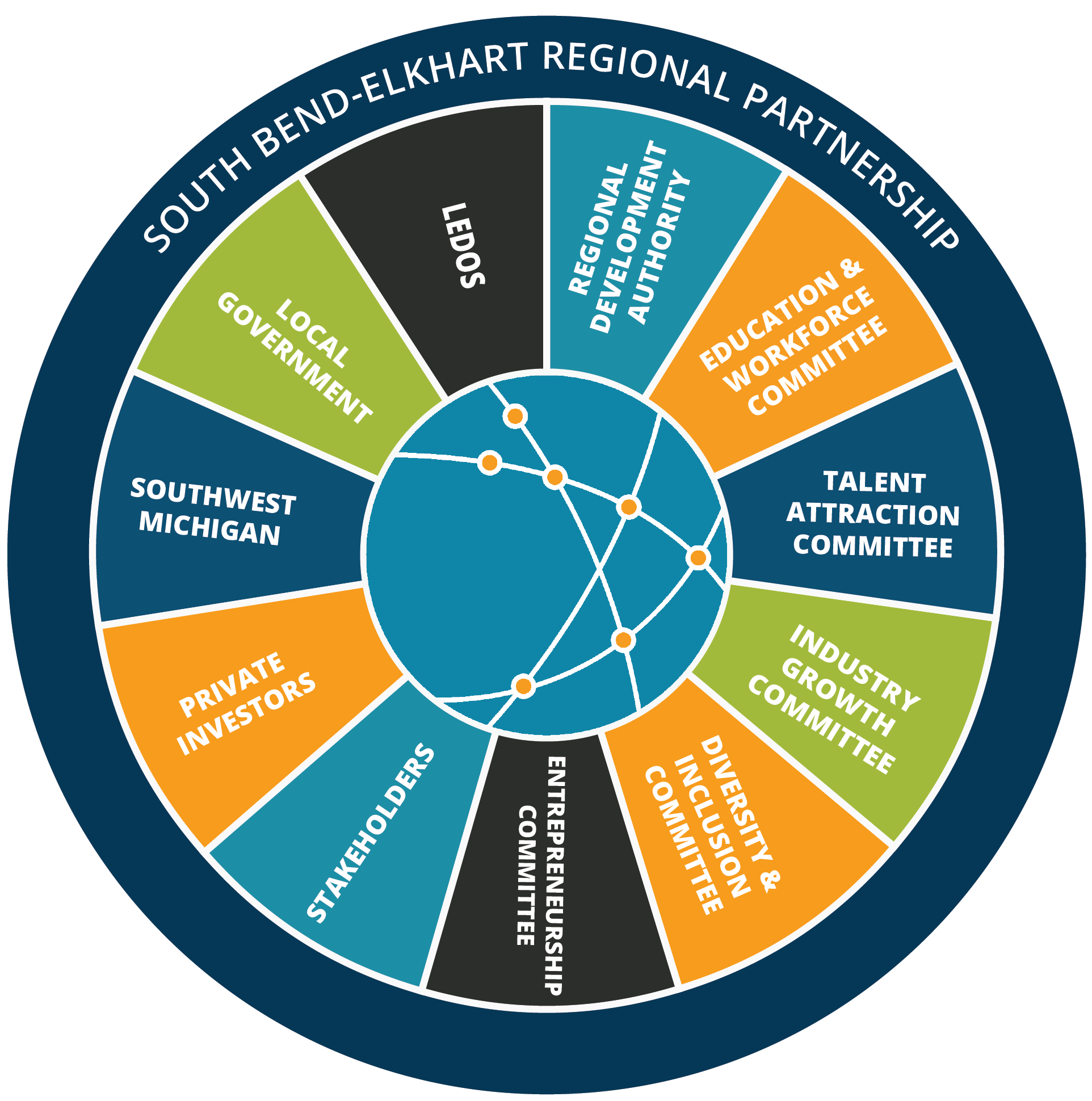 Part of what sets the region apart is also what highlights the need for a framework that includes such broad geographic and thematic representation. The South Bend - Elkhart region spans northern Indiana and southwestern Michigan with differing funding engines and state governments, but residents that flow back and forth across the border regularly for work and play. While many regions in the United States are defined by a single urban area, the South Bend - Elkhart region has a collection of small to mid-sized cities and a number of smaller communities, totaling 47 across multiple counties.

The University of Notre Dame is the region’s largest employer and research institution, but it is far from the only significant player in the region’s higher education efforts. Indiana University, Purdue University, Ivy Tech Community College, and Southwestern Michigan College are all public, state schools with campuses in the region. A number of private colleges educate nurses, teachers, and those in other professions, who choose to live and work in the region.  These schools, as well as the municipalities, the chambers of commerce, and economic development corporations, and others share a common interest in advancing the region’s economy.

Through the coordinated efforts of the South Bend - Elkhart Regional Partnership, the region is prepared to act on the recommendations in the REDS plan.