What’s so great about the Hoosier state? It’s not Illinois. 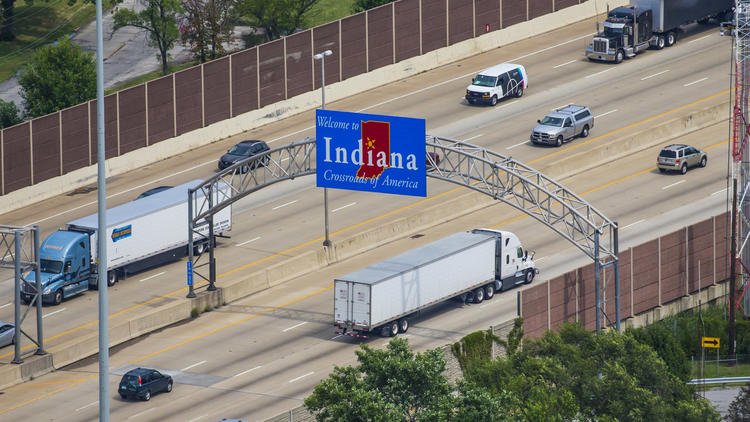 What’s so great about the Hoosier state? It’s not Illinois.

A politician smiling for the cameras at a groundbreaking ceremony always makes for a silly image. But when Indiana Gov. Eric Holcomb showed up in Gary recently wearing a hard hat and holding a shovel, he was doing two important things: welcoming a trucking company from south suburban Chicago Ridge, and taking a dig at Illinois.

“We are thrilled to welcome HMD Trucking to Indiana, home to balanced budgets, a AAA credit rating and a low cost of doing business,” Holcomb said. “It is clear why HMD Trucking decided to move from Illinois to Indiana. We have become the best state in the Midwest to start, get and grow jobs.”

Ouch, Gov. Holcomb, the truth hurts. Almost like getting smacked with a shovel.

Alas, it’s no longer surprising when an Illinois company leaves for Indiana. HMD is building a $6 million headquarters and depot in Gary, with plans to create 500 jobs by 2021. Alliance Steel of Bedford Park wants to build a $35 million plant in Gary. Hoist Liftruck and T&B Tube have jumped the state line. More will follow, taking jobs and investment with them. Why? Because Indiana is one of the best states in the nation for doing business, and Illinois is one of the worst.

Illinois lost one big competition this summer when Foxconn chose southeast Wisconsin, just across the border, for the site of a proposed $10 billion LCD panel factory. Eyes now turn to Toyota and Mazda, which are scouting the Midwest and South together for a location to build a $1.6 billion assembly plant that could employ 4,000 workers. Illinois and Indiana reportedly are on their list, and no wonder: two centrally located manufacturing states with efficient rail and highway systems and deep auto industry roots. Lots of cornfields in both states, too: the perfect setting to break ground on a big factory.

Despite the similarities, the two states have very different economic prospects. Indiana is in fine fettle, while Illinois is a basket case, with more than a $130 billion in unfunded pension liabilities, an unbalanced budget and $15 billion in overdue bills. Illinois has higher taxes, too, which would need to be raised even higher to right the ship. We have no idea what that would cost taxpayers, given that the Democrat-controlled General Assembly, ruled by House Speaker Mike Madigan and Senate President John Cullerton, has resisted Republican Gov. Bruce Rauner on his turnaround plan. This constitutes a major roadblock to future job growth and prosperity.

Employers don’t want to pay for someone else’s dysfunction. They want to grow in a healthy, stable environment. They want trustworthy government, simplified regulations and the lowest costs possible. So things keep looking worse in Illinois, and better in Indiana. Chief Executive magazine ranks Indiana No. 5 in the country for business, with Illinois at No. 48. US News & World Report has Indiana as the No. 1 “best state for government,” while Illinois is No. 47. The major credit rating agencies all give Indiana a top score and put Illinois at the bottom.

As for the proposed Toyota/Mazda plant, we’re rooting for Illinois, of course. But the precariousness of this state is a big red flag. The only negative comment we’ve seen about Indiana is that its 3.1 percent unemployment rate could be too low. “The job market is so strong that automakers might have a hard time finding enough employees,” USA Today reported. Illinois’ jobless rate is 4.8 percent, higher than the 4.3 percent national rate.

So, what’s so great about the Hoosier state?

“We don’t spend money we don’t have,” Victor Smith, Indiana’s former secretary of commerce, told us. “We provide a predictable environment for business. Those are two huge things that are very difficult to do from a discipline standpoint.” He’s right. Indiana runs a budget surplus, has nearly $1.8 billion in a rainy day fund and keeps taxes low. Oh, if you’re wondering about Illinois’ rainy day fund, there isn’t one.

In general, Indiana has a pro-business reputation. Unlike Illinois, it’s a right-to-work state. Another Indiana selling point: The cost of workers’ compensation insurance there is about half what it is in Illinois. Over time that could save a business millions of dollars.

Rauner recognizes Illinois isn’t competitive. He wants to reform workers’ comp and make other changes to attract business investment, but lawmakers in Springfield have done little to make that happen. This is the state that took two years to get a budget passed.

Steve Corda, HMD Trucking’s controller, told us the company had many reasons to expand in Gary, including the availability of land, but also on the list is Indiana’s AAA credit rating. “The economy is more stable,” he said. “They don’t have to go out and tax the businesses and tax the consumers (more) in order to run the government.”

Illinois is in deep trouble. Jobs and prosperity are at stake. Our message to Gov. Rauner, Speaker Madigan and President Cullerton: Grab your shovels. Dig us out.