ELKHART, Ind. (Jun. 18, 2019) – Ground was broken today for a $40 million mixed-use development in the heart of downtown Elkhart, bringing together the private, public and philanthropic sectors as part of an unprecedented partnership aimed at redeveloping the 105-acre River District. 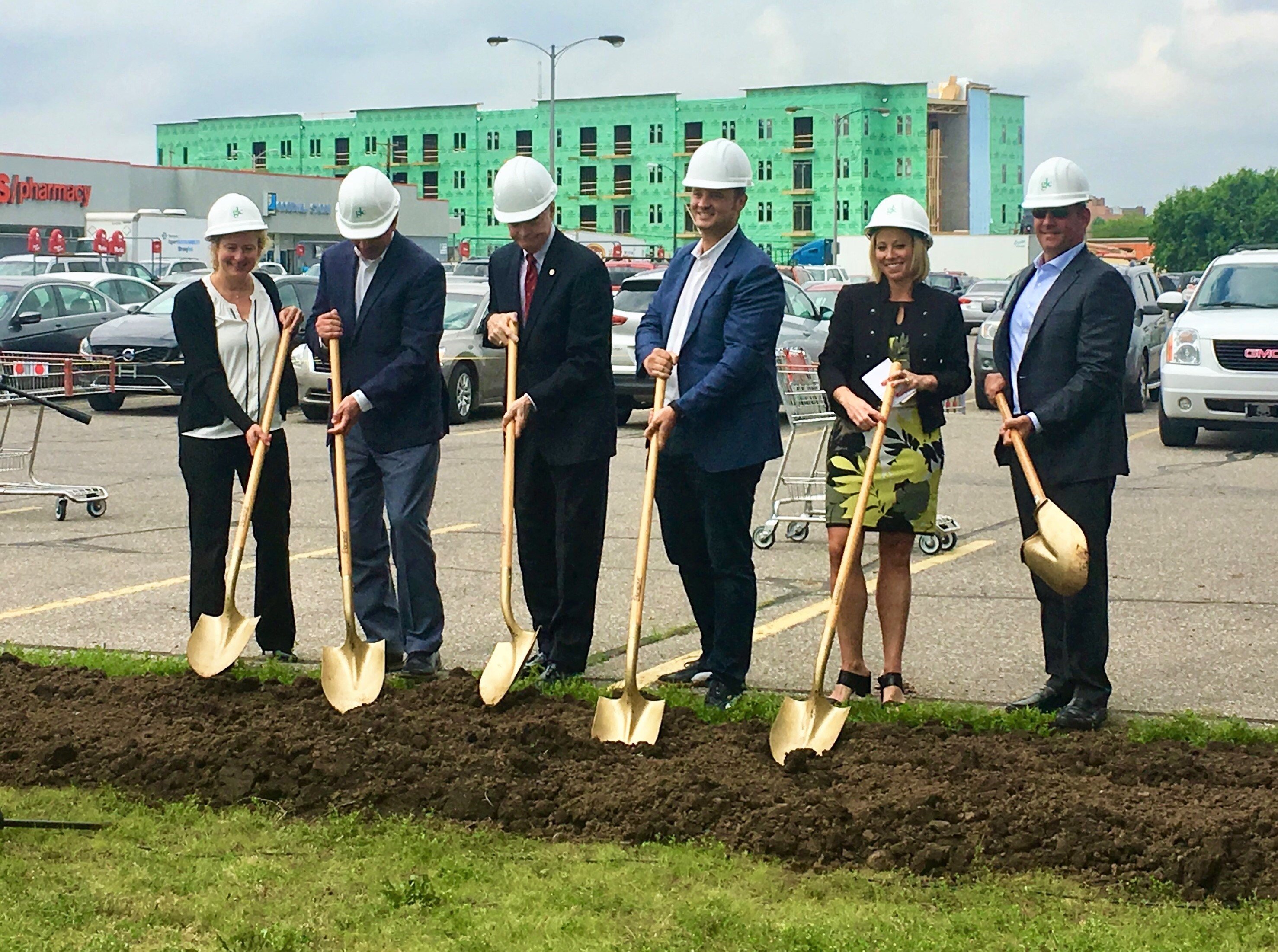 The River Point West development is the third anchor project in the River District, which was commissioned by the City of Elkhart in 2017. It represents a combined $170 million in public-private investment, including $2.7 million in Regional Cities funding.

“This type of development happens once in a generation, and we are proud to play a key role in downtown Elkhart’s resurgence,” said Brad Toothaker, managing partner of Great Lakes Capital. “Our neighborhood center will serve as a catalyst for growth and redevelopment that will have a ripple effect throughout the entire urban core.”

The River Point West development would not have been possible without the leadership of Elkhart Mayor Tim Neese, the Elkhart Redevelopment Commission, the Elkhart Common Council and the South Bend – Elkhart Regional Development Authority.

The new Martin’s Super Market will feature the first to offer grilled-to-order Pub Burgers in the Meat Department. In addition, the Delicatessen will also feature a Smokehouse Signature BBQ station, the fourth store in the company to offer that customer favorite. The new store will continue to feature the company’s unique departments including Bake Shoppe, Service Meat Counter, Seafood Shoppe, Flower Market, Salad Bar and both organic and conventional fruits and vegetables in the Produce Department. Seating will be offered in the Side Door Deli , as well as a Starbucks Coffee, which will offer customers convenience and comfort for in-store menu offerings. Martin’s Groceries To Go online ordering program will be offered for both pick-up and delivery.

“In 1990, we were proud to open the doors of our Jackson Street store, which at that time brought exciting and innovative features to the Elkhart downtown community,” said Amy McClellan, SVP, Martin’s Super Markets and Division VP, Retail, SpartanNash. “Now we’re again on the threshold of a new major redevelopment project with the City of Elkhart, and we’re excited to again bring to this new store a great shopping experience our customers can count on.”

“Just two years after the City’s adoption of the River District Revitalization Plan, the River Point West Groundbreaking assures that nearly 50 percent of the River District will be under construction and complete in 2021,” Mayor Tim Neese said. “Not only has the plan included elements advocated by the public – including a local grocer – but the actions we have taken to date represent transformative progress we can all be proud of. As the City continues to enhance public infrastructure in this area and solicit additional private investment around confirmed, anchor projects, I am excited by the vibrant future that lies ahead for the City of Elkhart.”

Regional Cities Initiative in North Central Indiana
This project was recommended for funding by the South Bend – Elkhart Regional Development Authority (RDA) and are part of the region’s Smart Connected Communities Plan, which was selected to receive $42 million of state grant funding that is currently being deployed in 26 regional development projects in three counties totaling over $400 million in quality of place investments.

North Central Indiana (South Bend – Elkhart Region) was one of three Indiana regions selected to receive state funding through the Indiana Regional Cities Initiative, which will allocate a total of $126 million toward 100 quality of place projects totaling more than $2 billion in combined state, local and private investment in order to retain and attract top talent to the Hoosier state.

About Great Lakes Capital
Great Lakes Capital is a real estate private equity firm uniquely positioned to add value to real estate investments through development, redevelopment and opportunistically investing across the real estate spectrum and throughout the capital structure. We concentrate on several core asset classes, including office, industrial, retail, medical office, multifamily and other similar conforming product types as well as mixed use projects. As a market leader in new development we actively address the needs of our tenant partners in addition to speculative development meeting needs the market has not yet reacted to. For more information, please visit: greatlakescapital.com

About the Regional Development Authority
The South Bend – Elkhart Regional Development Authority (RDA) is a separate corporate and political body that was formed in 2015 to apply for and then distribute the $42 million of Regional Cities Initiative funding to spur investment in quality-of-life projects for Elkhart, Marshall and St. Joseph counties and the municipalities within the region. The five-member board experienced in transportation, regional economic development, education, business and finance was appointed by the mayors and commissioners of the member counties in the South Bend – Elkhart region. The Regional Partnership serves as the administrator for the RDA to allocate Regional Cities Initiative funding to the 26 quality of life projects.