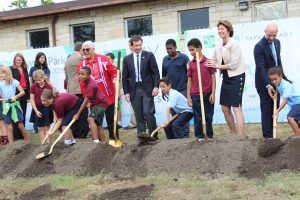 Aaron Perri, the Executive Director of Venues Parks and Arts says the idea is for Howard Park to be a focal point of the city.”We could not be more enthusiastic about the major transformation that is going to happen here. It’s not the first transformation to happen at Howard Park. As a matter of fact, this used to be a city dump at one point in time. This will be a signature playground for the city of South Bend. It will be unlike anything we’ve ever seen,” said Perri.

Construction at Howard Park is expected to be complete by early 2019.

SOUTH BEND, Ind. (October 2, 2017)– Mayor Pete Buttigieg and community leaders will attend the groundbreaking ceremony for the new Howard Park Recreation Center on Wednesday, October 4 at 11:00 a.m. Additionally, an open house at the Lodge Building at 301 S. St. Louis will take place from 11:00 a.m. to 1 p.m. and 4:00 to 7:00 p.m. to showcase Howard Park renderings and answer any questions.

After over 9 months of planning the conceptual framework for the parks and trails along the St. Joseph Riverfront, the design and construction planning of the Howard Park renovation process began in Spring 2017. After the existing ice rink and recreation building at Howard Park reached the end of their life cycle, plans for a new space became a priority. This phase of the new Howard Park will include a new mixed-use Community Center, new ice/water feature and a signature playground. Funding for this project comes from the $42 million My SB Parks & Trails budget.

“The new Howard Park will help turn our attention toward one of our City’s greatest assets: our river,” said Mayor Pete Buttigieg. “As one of the central projects in the My SB Parks and Trails Initiative, this revitalized space will be a center of community life upon its completion.”

Located at the corner of Jefferson Blvd. and St. Louis Blvd., the new multi-purpose building design will model the urban area surrounding the park by bringing the building to the street edge for a vibrant, active space. The community center will be LEED v4 certified, illustrating Venues Parks & Arts’ commitment to sustainability. Architectural lighting will artistically adorn areas of the park to complement the South Bend River Lights and modern, yet modest sound systems will be enjoyed in select recreational areas. The new designs also feature a unique space specifically designed for adjacent street festivals and food trucks.

This phase of the Howard Park upgrades also calls for an interactive water feature and companion ice facility which will allow the space to be used year-round. Ice skating has long been a tradition at Howard Park and the new skating trail will be among the most unique of its kind in the country. It’ll also double as a water play feature in the summer months. The entire area will be flanked by a signature series of playground elements designed for universal access, intergenerational play, and discovery.

“The new Howard Park is truly a design for the ages, inspired by the ages. We are very fortunate to have this asset. I look forward to introducing the residents of South Bend to the ‘surprise and delight’ that will exist in our city’s first public park when it re-opens in 2019,” said Aaron Perri, Venues Parks & Arts Executive Director

My SB Parks and Trails is a combination of park, trail, and riverfront upgrades that will fundamentally change the landscape of South Bend’s shared green spaces throughout the city. Inspired by the community’s request for an improved parks system, My South Bend Parks & Trails projects were developed by South Bend residents through thousands of pieces of feedback, hundreds of hours of public meetings, and dozens of resident engagement sessions. Full project information and renderings, including plans for Charles Black Rec Center, can be found online at www.mysbparksandtrails.com.