SOUTH BEND, Ind. (Aug. 26, 2020) -- Last week, Indiana Secretary of Commerce, Jim Schellinger visited the South Bend – Elkhart region to tour some of the Regional Cities Initiative projects that have been completed or are currently under construction. 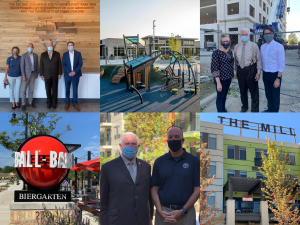 These four projects and 22 others were recommended for funding by the South Bend – Elkhart Regional Development Authority (RDA) and are part of the region’s Smart Connected Communities Plan, which was awarded $42 million in state grant funding to support projects located in Elkhart, Marshall, and St. Joseph counties. Totaling nearly $400 million in quality of place investments, 18 of the projects are complete, four are currently under construction, and four more are in the planning phase.

"We could not be more enthusiastic about the transformations happening across the South Bend – Elkhart region,” said Regina Emberton. “Talent Attraction and Retention is one of five main initiatives of the Regional Partnership as we work to transform negative out-migration that is common in the Midwest to positive in-migration. Having the ability to offer both great jobs and a vibrant quality of life is really making a difference in the population numbers of our region - we’re heading in the right direction!"

300 East LaSalle, a $49.3 million development, awarded $4.9 million in Regional Cities funding is currently under construction and will offer 144 residential units and 30,000 square feet of commercial space to accommodate a grocer and pharmacy in the East Bank Village of downtown South Bend.

"It's amazing what's happened up here in the central region with the Regional Cities initiative," said Schellinger during an interview with abc57. "I’m so impressed with the whole region, Elkhart County, St. Joseph County, Marshall County, you told us what you were going to do, and you've done exactly that."

Setting the tone for downtown Mishawaka, The Mill at Ironworks Plaza (The Mill) consists of 232 luxury market rate apartment homes and 13,213 square feet of retail. The project, which received $5.26 million in Regional Cities funding, opened in the fall of 2019. In addition to the residential occupants, Jack’s Donuts and Kalon Hair Lab have moved into the project.

During the project’s groundbreaking ceremony in 2017, Mayor of Mishawaka, David Wood said, “This project will be transformational to our historic downtown,” and he was correct. The Mill continues to enhance downtown Mishawaka and has helped to increase social connectivity in one of the South Bend – Elkhart region’s urban cores.

Another great addition to the downtown area is the Ball Band Biergarten, perfectly positioned between the new Mill at Ironworks Plaza and Beutter Riverfront Park, this project received $114,000 in Regional Cities funding and opened on July 4, 2020.

The South Bend – Elkhart Region was one of three Indiana regions selected to receive state funding through the Indiana Regional Cities Initiative, which will allocate a total of $126 million toward 100 quality of place projects totaling more than $2 billion in combined state, local and private investment in order to retain and attract top talent to the Hoosier state.