Just a year after purchasing a new building, snack producer, Pretzels, Inc. is celebrating the grand opening of its Plymouth facility. In recognition of this impressive project timetable, state and local dignitaries came together on October 17th for a celebratory ribbon cutting and tour of the building located at 2910 Commerce Street. Pretzels will also hold an open house for the community in spring 2018.

In October 2016, Pretzels, Inc. purchased the 45,000-square-foot facility in Plymouth. The building was developed by the community to attract manufacturers looking for an existing facility, while allowing for quick customization to meet specialized business needs. This acquisition made Pretzels the first new manufacturer to move into Plymouth in nine years.

“Plymouth has rolled out the red carpet for us,” says Pretzels, Inc. Co-Owner, Chip Mann. “The community has provided tremendous support as we needed to ramp up operations quickly. I can see a long and strategic partnership with them for years to come.”

Pretzels began the buildout of their new facility in November by pouring concrete to finish the floor. In just three months, the building was transformed into a functional production facility with a completed buildout of over $6,000,000 and an equipment and machinery installation of approximately $12,000,000. 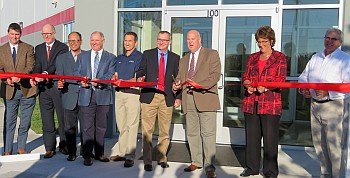 The Plymouth plant became operational and began shipping products to customers in April 2017, just five months after construction began. The new plant is responsible for the production of peanut butter filled pretzel nuggets and bulk pretzel products. Today, the Plymouth Pretzels facility employs over 40 full-time workers, with plans to create 65 total jobs by 2020.

Pretzels is a second-generation, family-owned business headquartered in Bluffton, Indiana. The company began in 1978 and has grown since then to employ approximately 360 workers and manufacture hundreds of varieties of snacks for store brands, private labels, and its own Harvest Road products. One of its fastest growing products is peanut butter filled pretzel nuggets, which are produced exclusively at the new Plymouth facility.

The Marshall County Economic Development Corporation (MCEDC) is the lead countywide economic development organization servicing Marshall County, the City of Plymouth, and the Towns of Bremen, Bourbon, Argos, Culver, and LaPaz. MCEDC’s mission is to expand and diversify the economy of the county and its communities by fostering investment in new and existing businesses and creating entrepreneurial capacity. Visit MCEDC on the web at www.marshallcountyedc.org, like on Facebook, and follow on Twitter