Luxury apartments near completion in Plymouth

On Wednesday, NewsCenter 16 got a chance to see what some of those apartments might look like with a tour of them that shows what developers hope it will bring to the area. The multi-million dollar development is expected to bring 40 apartment units spread out among three buildings. It'll be called River Gate South. 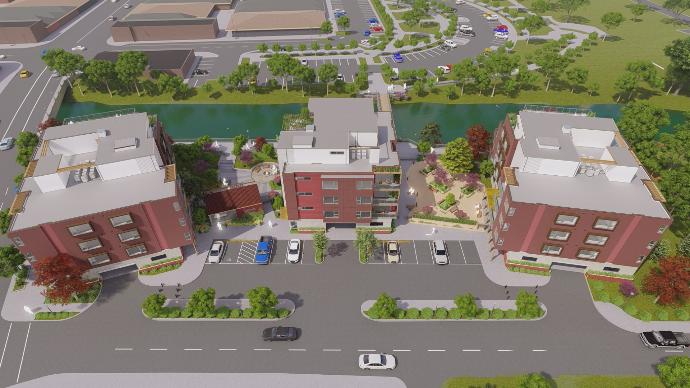 "Anybody who's going to be coming here is going to be looking for a cool place to live and a price point that's compatible with the lifestyle they're living here," said developer Scott Sivan. Sivan said urban downtown living is trending now locally and nationally. "The priority is to urbanize because density is good for business, it's good for keeping community it's good for walking and the kind of community life that suburban life doesn't have anymore and the trends are all toward the downtown," Sivan said. He gave many of us a tour to see the work in progress.

"It's important for us to have something like this in the community for not only recruitment but for also for retention of our physicians, our leaders, our staff and colleagues," said Hospital Administrator Dan Kunde at St. Joseph Health Systems in Plymouth. The hospital is just one of many employers looking forward to having this development. "I think it's great for the community," Kunde said. "It's within walking distance of so many different shops and so many different restaurants." All of the apartments here are expected to have spectacular views of the Yellow River and Downtown Plymouth.

"We're adding a lot of amenities that traditionally people would find in a bigger city, things that attract not just millennials but people of all ages," said John DeSalle of the Regional Development Authority of Marshall County. "It's not just a turning point for Downtown Plymouth, it's actually a turning point for our entire region ."

The luxury apartments will be one, two and threebedrooms ranging in price from $1,100-$2,000 a month. At least one, if not two, of the three buildings is expected to be open by August. "When these three apartment buildings are completed they're going to be beautiful, absolutely beautiful," DeSalle said. "I think it's going to be very enticing for people of all ages to want to locate here in Plymouth, work in the local community and have a great place to live."

The developers of River Gate South, INSITE Development, are the same who created Mishawaka's River Rock Apartments along the St. Joe River.

To watch the full video on WNDU.com, CLICK HERE